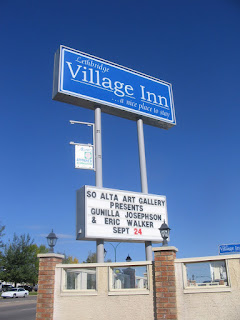 In 2005 the Ottawa Art Gallery toured my Railway Lands show to the Southern Alberta Art Gallery (SAAG), in Lethbridge, Alberta.


As an artist you never know when you go to a new place if the people you meet will be pleasant and supportive, or indifferent and patronizing. No matter how accomplished you are as artist, you are from time to time at the mercy of directors or curators who believe they're doing you a favour by showing your work.

With that in mind and with some hesitation, I flew out to Lethbridge, Alberta to install Railway Lands at The Southern Alberta Art Gallery. I didn’t know anyone from SAAG, just names from letters and emails. I got into the arrivals area in Lethbridge airport and was on the look out for someone named Jason. I scanned the room looking for an art gallery type, when a young man with long curly blond hair stepped up to an old farmer standing next me and asked him if he was Eric Walker? Jason was the show preparator and a keen young guy. After sorting out the greeting, he drove me to the Southern Alberta Art Gallery and introduced me to Joan Stebbins, Marilyn Smith and the others in the gallery. Afterwards we walked around the gallery and discussed how the art would be hung.

The flight from Ottawa to Calgary and Lethbridge was a bit tiring so I was glad when Jason drove me to my motel, The Village Inn, on the northeast corner of 4ht Avenue South and Scenic. He drove there the long way to pass the motel’s sign on 4th. “Look at that,” he said, pointing up at it. It read in big letters, SO ALTA ART GALLERY PRESENTS GUNILLA JOSEPHSON AND ERIC WALKER. Now that’s first class, I thought to my self. After checking in I walked down Scenic Drive to a local liquor store, recommended by the motel manager and bought myself a bottle of scotch.

Back in my room I pulled the curtains and looked out onto the western horizon, with Scenic Drive in the foreground and the sun beginning to set over the coulee. I poured myself a glass of whiskey and sat there until the sun gradually blazed up crimson and faded away. My face was red the next morning from being magnified by the motel room window, but nobody at SAAG noticed. I got to work with Jason laying out the works. Later that day Joan Stebbins took me to the Penny Coffee House to meet Gunilla Josephson and her partner the novel writer Lewis Desoto.

Gunilla and Lewis were both pretty cool, dressers and cigarette smokers. I learned Gunilla and Joan were good friends from way back and Gunilla didn’t hesitate to tell Joan how much she disliked the Village Inn, a come down from the last time she had shown at the Southern Alberta. Later that day, I once again sat at the table in my room at the Village Inn with a glass, watching the traffic passing by on Scenic in the red glare of another blinding sunset. It would be three more days before Penny came out.

It is a two hour time difference from Ottawa to Lethbridge, so I was still getting up early. I recall drinking tea, looking out the bathroom window to the reddening eastern horizon and listening to the early news on a Calgary TV station. My morning routine began with a walk over to the Tim Hortons for coffee, then down the street to a pancake house for breakfast, where the service was pretty good, friendly people. From the pancake house I made my way up to the Penny for a better coffee and a newspaper. I had time to kill before the folks at SAAG got to work, so after coffee I would wonder around Lethbridge taking pictures. One evening, after my daily visit to the gallery, Jason took me to a club somewhere around 2nd Avenue. It was a pretty cool place, grooving kids, a bit shaggy and unkempt, sweet jazzy music. Gunilla was there. She and I might have looked out of place in such a joint, except we were visiting artists with Jason, a not uncommon sight in Lethbridge.
It had been arranged beforehand that I would make a presentation, but I only discovered on the day, it was to be in an Art Now type seminar class at Lethbridge University. I prepared a text and slides in advance, so I was prepared, but instead of speaking to 20 art students, this was a general arts course of 200. I was warned beforehand that at 12 sharp most of the people would get up and leave. And so it was. I stopped my presentation at noon; big round of applause, then asked the actual art students who stayed around, to come down to the stage for a more intimate talk.

After another blazing, irradiating, sunset over Lethbridge and the solitude of my hotel room, Jason and I went out to the airport next morning to pick up Penny. Penny noticed right away that my face was sun burned. Indefatigable as a host, Jason drove us around Lethbridge then into the coulee to see the historic Indian battle site and the base of the famous CP Bridge over the Old Man River.

That evening Joan and Luke Stebbins had a dinner party at their house on the west side of the coulee, for Gunilla and Lewis and Penny and I. Marilyn Smith and her partner Darryl also attended. Joan and Luke’s beautiful modern home was built into the top of the coulee and had a fabulous view to the south and east. The house was filled with art, all very tasteful and chosen with care. I asked Luke, a noted biology professor at the University of Lethbridge about the wildlife in the coulee. He told me he occasionally took a gun down into the coulee while walking his dog because of the coyotes, but otherwise not much other than rabbits, snakes and rodents. I remember dinner was a beautiful planked salmon Luke cooked, with a sprightly green salad, very good BC wine and a sorbet to finish. There was much good conversation and I got a little tipsy. Nothing obvious, but the latter part of the party is a bit of a blur. We drove back to the Village Inn with Gunilla and Lewis.
It seems to me the opening was the next evening, but I may be wrong. Anyway, before the event we all gathered, artists, loved ones and gallery staff for a big dinner at a Chinese restaurant called the Regent. The dinner was lively and deluxe in every respect. The Schezuan beef was particularly memorable.

The opening itself was very pleasant, a good turnout, lots to see with my work in the Carnegie space and Gunilla’s multi media work down stairs in the new gallery. I remember I chatted with David Hoffos for a while. Later that evening we moved on to another opening at a private gallery nearby. The work was pretty interesting and the place was packed with local art students and teachers, some who had been at my opening, others I didn’t recognize. Once again Gunilla and I were treated with much deference. One of the exhibiting artists, a young woman, who perhaps had too much to drink, kissed me.
Next morning Penny and I picked up a rent a car and set off on a road trip to Waterton National Park. Waterton National Park is a joint US/Canada park, called Glacier National Park in the United States and quite unique. Our road trip took us out of the prairie, into the foothills, right to the base of the Rockies, where the little tourist town of Waterton sits on a long lake, which reaches into Montana. On the way in we saw a bear cub on the road. Penny stopped the car and we waited until the cub moved along, knowing that momma bear was somewhere nearby watching.

Waterton was just shutting down for the season when we got there. We noted the Shining type hotel resort on the hill, the tiny RCMP detachment office done up as a log cabin, the last chance gas station and the comprehensive tourist lodge with cabins opening up on the rocky lake shore. The wind was up and the beach was empty. We stood around watching the chop on the lake, cold in the glaring sun. After a lunch of hamburgers and fries at the lodge, we drove further into the park to the falls and Red Rock Canyon. I’d never been to a canyon before, so it sounded cool, like in a cowboy movie. As it turned out Red Rock Canyon was pretty narrow, but curious and geological with stratified reddish sandstone. The real canyons I later realized were along the road to the park where the foothills drop off at the base of the mountains.

Everything I saw that day was startling and beautiful. As a snobbish Nova Scotian I had no impression at all about Alberta and the Rockies and didn’t care. I left Waterton Park and Southern Alberta with an indelible love for the magnificent and sublime landscape I saw there. Fulfilling his final duty Jason drove Penny and I to Lethbridge Airport the next morning, where we flew away in the cloudless sky to Calgary and home.
at June 13, 2017