To Be Heard With the Eye Only and Other Tales of Modernism, Emily Falvey, 2002, Part 1

Eric's note: this is Emily's catalogue essay for my Tokyo show at the Canadian Embassy in 2002. It's a brilliant, poetic, and insightful look into art practice. Well worth reading.


As you read these words there is a voice inside your head that does not make a sound. You hear nothing, but there is a tone nonetheless. And this tone is nothing but a particular, resonant feature in an immense and inaudible landscape of “sounds” that will follow you throughout your life, sonorities in the deaf and colours in the blind.

Such resonance constitutes one of the most profound ironies of the modern visual arts, a palpitation that ‘strikes the eye’ and makes it resonate, what Pascal Quingard once playfully referred to as l’oreille de l’oeil (the ear of / from the eye). It reminds us that in the tale of Narcissus (art for art’s sake) there is also an echo, that the retinal also has a moment of resonance, a refrain that Duchamp eloquently intoned with his Rotoreliefs, optical illusions that must be played like records. Modern art is above all its own undoing.

It was at the pitch of this irony that, during a twenty-year, highly romanticized period at the Nova Scotia College of Art and Design (1967-1987), some of eastern Canada’s most resonant artwork was produced. It is work that retro-spection would like to cast as either neo-avant-garde or proto-postmodern, but which might be better described as a certain kind of modern echo. It was near the end of its overture that Ottawa based artist, Eric Walker, devised his aesthetic strategy, and it is within the cadence of its ironic and dissipated modernism that his work continues to resound.

Walker’s practice has for many years been tied discursively to what should be by now an anachronistic discord. Characterized perceptively on the one hand as “icons of a modern world,” his painted constructions, which he assembles from memory, local histories and detritus found in the streets, are derided almost paranoically on the other as “faux folk art.” Although we tend today to pay lip-service to alternative histories - exalting them as inverted, deconstructed, non-linear and marginal - our eyes continue to roll at the slightest indication of more ‘credulous,’ frequently spoken narrative types - like folklore for instance. You can hear the eyes rolling. Today we are ficto-critical; today the artist is an ethnographer.

On that note, one must not overlook certain structuralist leanings that tend to go in the other direction, defining Walker’s work in terms of semiotics. It seems a little unfortunate, however, to impound his multifaceted constructions at the “switching station” of discursive meanings, thus grounding them forcibly in written or textually based concepts of language. And while Walker’s work often involves textual insertions, they function more as compositional markers than discursive texts - simple descriptions within a more diverse articulation of movement and retrospection. Walker’s recent series of locomotives are, for instance, closer to enunciations than texts, mnemonic rather than linear documents. This is all the more evident given their status as inventions of hazard, which brings them closer to semiotisation than semiotics: the kind of play, both musical and rhythmic, that one might find animating a composition or resonating throughout an arrangement.
at July 01, 2016 No comments: 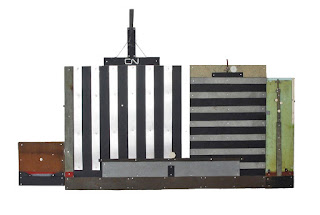 That which strikes the eye breaks its orbit and sends it into space. Crackle on the surface of formalist paintings has this effect - it strikes at the heart of pure painting, picketing its surface with textures and sonorities in a kind of multidimensional revenge. This sort of orbital strike also resounds in a work like Walker’s The Ottawa Airport and Railway Lands Seen from a Satellite in Space, which depicts a celestial view of Ottawa’s transportation system, reducing it to a formal pattern. The constellation of nails that holds the composition together also inflects it with a residual percussion, a rhythm that is palpable, just as written music embodies notes that one hears in silence. Diagrams are equally paradoxical phenomena, conveying movement through stillness in the way that Walker imbues his measured, immobile compositions with a dynamic sense of force. Such aporias lie at the centre of modernity, and so we might say that modernity has no centre. It is a conundrum that plays lyrically throughout Walker’s work. In his constructions we encounter modernism and its myth of progress as a ghost story - a haunted ruin. The almost audible, diagrammatic movement of his compositions carries a sense of nostalgia that has always tainted the modern, which is in fact, its ironic precondition. In Walker’s visual arrangements modern progress is also its passage, utopia assumes dystopia. Modernity is certainly an oppressive discourse, but it is also a fleeting one - it has always worn postmodernity on its sleeve.

And what should we call this soundless sonority, which plays havoc with our notion of visual art, even undermines it? Which words should we use to call the silence that calls us instead, calls us up short, like a consciousness? There is a range of neologisms that one might choose from, the most popular being, of course, deconstruction. The texts that surround Walker’s work describe this resonance more variously as a sense of humour or play, a fine line, an infectious sense, inventiveness, cleverness, hidden narrative, potential drama, a sinister quality, delight, bewitchment, and finally, death. In the end, however, what we call these pictures may not be as important as what they ask us to recall - an uncertain, and indeed ethical situation in which the eye starts hearing things.