An Interesting Event in 1983 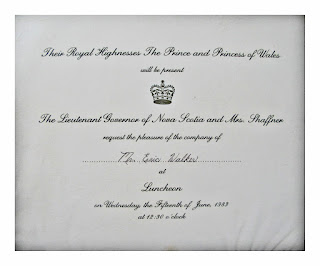 In 1983 I was president of the Nova Scotia College of Art and Design Student Union. Because of this I was invited, among a larger group who might be called at the time, the cream of Nova Scotian youth, along with the children of the politically connected and other hangers-on to meet the Prince and Princess of Wales, Charles and Diana. In retrospect after the untimely death of Diana, Princess of Wales, I have often reflected on my meeting with the charming young princess.

It was supposed to have been a garden party on the lawn of Government House, which at the time still had a view of the harbour. But as it was overcast and weather threatened, the reception was moved inside the Georgian mansion to the North Room. I lived nearby at 1257 Hollis Street and walked to Government House dressed in my snappy dark grey Salvation Army sports coat with matching grey felt pants and suede oxfords. Looking good in 1983 man!

I had expected ultra security as I turned off Bishop to Barrington and walked down the driveway to the portico where I was met by one lone Mountie dressed warmly, not in red serge, but in a regulation bomber jacket. “May I see your invitation sir”, he asked. I produced the invite and was waved inside.

Inside the historic building I was directed by a functionary into the North Room. At that time before renovations the North Room, the main ball room of the house was essentially unchanged from the storied days of John and Francis Wentworth and had the same look and feel and stink of death as the Red Chamber in Province House.

Taking a glass of wine from a long mahogany table groaning with sandwiches, French pastries, ornate flower arrangements flowing from elaborate silver repositories and ranges of over filled wine glasses, I checked out the scene. The atmosphere was close with a hint of sun baked curtains and mold, much like a certain antebellum mansion Penny and I visited many years later in Charleston, South Carolina, which had been left literally untouched since the Civil War.

Helping myself to another glass of wine I felt a certain breathless chill
fall over the room as another functionary announced the immanent arrival of their Royal Highnesses. As this reception was intended as a garden party the females in the room were dressed accordingly in light coloured knee length party dresses with matching hats of all descriptions, some wore white gloves. It made me wonder from what social caste these girls came from, as they were all done up en règle in garden party costume. It was a fair bet every one of them could pass muster at a Waegwoltic tennis social or a Junior Bengal Lancers ball. No dykes or odd balls wearing men’s clothing in this room.

Just as I was taking in this reflection the double doors at the end of the chamber shot open and a squeal arose from the girls, as if Simon LeBon had just walked in. I saw Prince Charles first squeezing away from the crowding party dresses who swarmed his wife. The crush around the princess was intense, but I could just make her out. She was dressed in a beautiful cream dress with copper trim, big copper buttons and a smart sailor hat with the same copper finish. A stunning garment and she was very pretty and young.

I noticed the Princess seemed a little ill at ease in the press of girls as if she were trapped. Her eyes moved from side to side looking to make contact and move on through the mob. Seeing my chance I put my glass down and positioned myself a little ahead of the bonnets and smiled at Diana. She spotted me instantly and reached out. The society girls looked on with some dismay as Diana moved past them and took my hand. I was perhaps the first male guest to exchange a few words with her at the party. I have no idea what I said, but it was pleasant and I knew she was just as nervous as I was, so I smiled again and wished her and her husband all the best and faded off. Looking back as I picked up another glass of wine from the mahogany table, I saw the party dresses envelop Diana once again and I felt sorry for the young princess.

After several glasses of wine and a couple canapés I felt a little more steady on my feet, in the social way so to speak and ready to say hello to Prince Charles. Prince Charles was done up in a nice toffee coloured, double breasted Duke of Windsor suit and seem quietly assured as he shook hands through a steady press of male admirers on the other side of the room.

Waiting in the queue I employed the same strategy as with Princess Diana and in an instant Charles’ eyes caught mine and out came the hand. I noticed he had a firm grip and he sized me up instantly. Caught my funny short hair, bad suite and John Lennon glasses. “So, tell me, what do you do?” he asked. I smiled broadly at the prince. “I’m an artist sir.” Prince Charles relaxed visibly at my reply. “Oh Really!” he replied. “Tell me are you one of those artist who it comes easily to, or do you have to work at it?” It was really such a charming and thoughtful question. “No Sir, I have to work at it, I replied.” Prince Charles smiled again, shook my had once more and very pleasantly closed off our conversation with, “Yes indeed, It’s the same with me, good luck.”

I don’t really remember much about the rest of the reception. Perhaps it was the wine. In due course a gentleman announced the Prince and Princess of Wales had left the room. This was our signal to clear out and out we went. I remember the strange sensation of walking out into the shabby real world of Barrington Street again. I paused under the portico, lit a cigarette and went on my way through the drizzle back to Hollis Street.