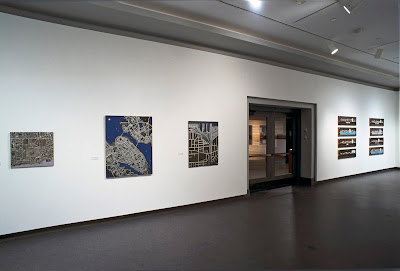 Container Ships at Halifax 2000 was a body of work I produced from around 2003 to 2006. It’s part of my larger Railway Lands series 1998-present.  The idea was to find images of all the container ships that called at Halifax in 2000 and represent them. I found about 60 images, of which thirty works were produced. The pictures were typically hung in stacks of four and shown in the original Ottawa Art Gallery show and three subsequent Railway Lands exhibitions circulated by the OAG, Fredericton, UNB, Lethbridge, Alberta, SAAG and Charlottetown, Confederation Arts Center. After making nearly half the works I submitted the idea for the new Halifax Library competition, however my late excellent friend Cliff Eyland  got the commission. The works consumed lots of hard to find materials including oxidized steel and vintage rolled floor linoleum. Without support or collectors’ interest I gradually gave up on the project. In the intervening years I demolished twenty Container Ships to reuse the materials in my ongoing Overhead View series. Now there are perhaps three stacks left in existence.

Recently a collector or collectors in Halifax purchased the overhead view, Halifax Elevators and South End Rail Yards, which is a signature piece in the Container Ship series and a stack of Container Ships from my dealer. This is very gratifying to me as my work has not been privately collected in Halifax. Aside for three works in the Art Gallery of Nova Scotia and a picture in the Dalhousie University Art Gallery collection, my work remains largely unknown in my hometown.