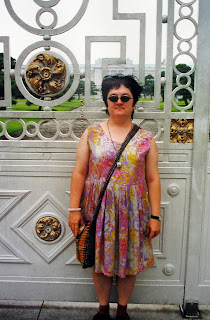 We returned to Tokyo in a first generation shinkansen, a quaint vehicle compared to the third generation train, with curtains and doilies and a more Chinese feel. The train was light that day, so the car captain in his white suit and gloves bowed to us particularly.

Back in town Penny and I took in more sights, the Tsukiji fish market, boat trip up Sumida, the Hazo-mon Gate, Asakusa Park, Shitomashi Museum and a trip to the Ginza where we shopped at Matsuzakaya, with its astonishing basement level Carrefour, with French bread, rolls and pastries, fancy cooked sausages and viands, and dainties of every sort, but the highlight of the Ginza for us was the Ginza Lion.

We were told the Germans brought commercial beer brewing to Japan. If that’s true, the Ginza Lion is certainly a shrine to German gesamtbrausaufen. Though ostensibly the Lion is a British “pub”, the joint is laid out like a vast, gloomy, underground, Bavarian beer hall with Teutonic details. Everybody spoke English and the beer came in big jugs. The coldest, crispest, sweetest beer I’ve ever drank; just perfect to dispel the sickening heat and humidity of Tokyo in the rainy season.

After a quick check of the gallery, the opening came off on July 3. It was very pleasant. A good crowd turned out. I had a translator for my remarks and chats with the patrons. The show was written up in a few magazines and a good time was had by all.

Penny and I flew out of Tokyo on the 4th of July. We had heard reports earlier that Al-Qaeda had threatened to blow an American airplane out of the sky on the 4th, so when we boarded our United Airlines flight we were conscious of that eventuality and wished the American air crew Happy Independence Day with a feeling of solidarity.

About half way through the flight I noticed the jet had left the big circle route, northerly to Alaska, as first displayed on the flight tracker screen and was heading straight across the pacific. We only found out later in Chicago that some Al-Qaeda moron wannabe shot up the El Al ticket desk at LAX causing an air traffic panic.

It seemed like another year passed before my works arrived back in Ottawa. In 2004 I made an overhead view picture of Tokyo called Blue Tokyo. The work was show at the Ottawa Art Gallery and subsequently at Lethbridge and Charlottetown in configurations of Railway Lands. A picture of it exists in the Ottawa Art Gallery catalogue, but I was never satisfied with it. So when the work came back from the Confederation Art Centre, I demolished it. In 2008 I started a new version of Blue Tokyo. It was completed in 2010.
at January 17, 2011