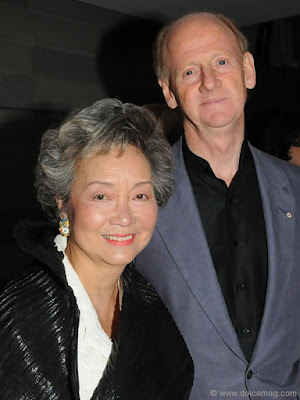 I had by chance shaken hands with Raulston Saul and Adrienne Clarkson as they were moving from a limousine on MacKenzie Street, beside the Chateau Laurier, to a horse drawn landau to ride to Parliament Hill for Canada Day ceremonies a few years back and was struck at the time by Adrienne Clarkson’s odd demeanor. I recall she seemed to look straight through me as we shook hands. It was a strange experience, so later during the reception when Garry Kennedy introduced us, I was not surprised when to my, “Thank you for inviting me to your home,” she replied by rote, “Every Canadian is at home in Rideau Hall.”


The reception droned on pleasantly. The crowd relaxed a bit under the influence of alcohol. Occasional bursts of loud laughter were heard and the violin and piano duo from the Royal Canadian Air Force played on at the back of the room.

Presently dinner was called and we were ushered into the Reception Room, a gallery like space where three long buffet tables, each with the same food items, were set up. There we helped our selves to the salad course. I selected among other things, cold marinated scallop slices, lovely little fois gras and lobster medallions, curious compressed pasta squares and thin slices of smoked bison.

From the Reception Room we were directed with our plates through an anti-room into the Tent Room. The Tent Room is an actual ballroom in the way the Ballroom we were just in, is not. The room was decorated in striped fabric draped to the ceiling, in imitation of the Prince Regent’s Pavilion in Brighton and is a cheery, if not somewhat odd room, where, as I said, I was seated at the Connaught table.

We were served a nice Okanogan white wine with salad course and I found conversation with the eight at our table- though I only knew one person, Marianne Heggtiviet from the Canada Council – easy and pleasant. It’s the practice at Rideau Hall to mix everybody up. We had the sister of one of the laureates at our table.

The dinner passed off like clock work with suspicious looking RCMP officer type “waiters” advising us on when to go for each course, whisking the used plates away in our absence.

The main course was centered on meat dishes and served buffet style as before. I chose arctic char and very tasty lamb. I think we were served Ontario red wine with dinner. It was delicious with the lamb. After the main course we retired to the buffet table again for deserts. I stuck with cheeses and chose a very good blue cheese from Nova Scotia. Another table was set with enormous chocolate bomb cakes. Coffee and tea was served with desert.

After desert both Madam Clarkson and John Raulston Saul got up at a small podium set up in the room and made remarks. Adrienne Clarkson appeared much more relaxed and bantered with her husband. The upshot of the informal speech was, that being an artist and surviving in a world that is sometimes hostile to artists was a great achievement and they, Clarkson and Raulston Saul, were happy to honour all artist and put on a good meal for them. As I listened to Adrienne Clarkson, I found I was starting to like her. It was a heartfelt remark.

After dinner we were ushered back into the buffet room, now transformed into a bar with the table, as in the Ballroom, displaying every alcoholic drink possible, with the emphasis laid on liquors and brandy and another table with more deserts. Clarkson and Raulston Saul chatted with the guests for a short time then retired to their private rooms.

The Reception Room, where the buffet bar was installed opens up into the Long Gallery, which is a sort of lounge decorated with chinoiserie to emulate a British manor house theme room. But the furniture, though nice was a bit of a mish mash and a little tacky. The room had a Glenn Gould piano and a jazz trio played to the lounging guests. They were an excellent group, hitting just the right note. I asked the group leader if the ensemble had any Jerome Kern in their repertoire. “Why of course sir.” the musician replied, “What would you care to hear?” Feeling a bit lonely without Penny, I asked them to play, The Way You Look Tonight.

I sat on a Chinese couch probably from Eatons and sipped my drink as the band played. When the tune ended I decided to call it a night. After thanking the musicians I made my way to the front door where another fresh-faced soldier boy waved up a taxi and I drove off into the night with the lights of Rideau Hall blazing behind me.
at March 31, 2010