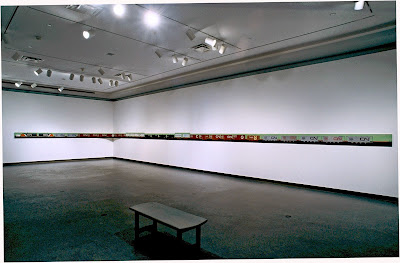 I was interested in making the panoramic train pictures, because I had never seen a picture of a whole train before. The first picture came about when Penny and I were artists in residence at Struts Gallery in Sackville, New Brunswick in the summer of 1998. I was making large pictures of microwave relay towers at the time, but as Sackville is on the CN main Line and train whistles blow there day and night, I got the idea to make a train picture. On August 13, I went to the Sackville train station, just down the street from Struts and photographed the Ocean Limited passenger train as it appeared that day. I wasn't sure how the picture would be resolved at that time.

Back in my studio in  Ottawa, I figured out a method using plywood and different found materials including steel cans, linoleum, rolled aluminum and spray paint to make a panoramic picture of the Ocean Limited as it appeared on August 13.

About a year later I decided I would do a picture of a freight train as a partner for the passenger train. As I had no way to photograph a freight train in Sackville at the time, I researched in a Canadian rail fan magazine and found a picture of a crew change on an east bound CN freight (148) outside Moncton on May 24, 1998.

Using this picture which shows locomotives 5637 and 5740 as the start for my train, I documented all the other freight car names and road numbers on two trips between Halifax and Ottawa on the Ocean Limited passenger train in 2000.

The Freight train is both a composite and real document of CN freight 148, as it appeared on May 24, 1998. I situated or "posed" the train on the long marsh at Aulac, New Brunswick, just outside of Sackville, beside the well known Stirlings, Buy Apples sign depicted in the work.

The Owens Art Gallery purchased the Ocean Limited East Bound in 2003 and Aulac in 2014.